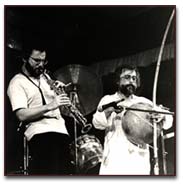 Born in 1939, in Istanbul, Okay Temiz was deeply involved in music from his early years. He got his first musical inspirations from her mother, Naciye Temiz, who had gone through classical Turkish music education. Again with the support of his mother, he started taking percussion and tympanum courses at the State Conservatoire of Classical Music in Ankara. Launching his professional musical career in 1955, Temiz continued his studies at the Tophane Art Institute, where he gained the musical knowledge and skills that allowed him create his own drum- a drum with a unique sound and features entirely different from conventional ones. Between the years 1959 and 1967, Okay Temiz performed in several programs and shows, accompanying dance music groups in Turkey. In 1967, he joined Ulvi Temel’s group and appeared in some of the most outstanding music halls of Europe. It was then when the Swedish saga started. There he met trumpeter Maffy Falay, whose artistry in improvised music had a strong impact on the artist . The two formed the group “Sevda” and were highly acclaimed by their fascinating music which fused the striking agility and rhythm of Turkish folk melodies with western jazz in a pulsating manner. In the years to follow, Temiz provided a prismatic musical palette to the Stockholm radio channels and the symphonic orchestra, adding new sonic colors as a percussionist.

In the meanwhile, he met the American trumpet master Don Cherry, also known as one of the pioneers of world music, then settled in Sweden. This turned into a long lasting partnership and the two performed together in several festivals, concerts and recordings for years. With the joining of the African bassist Johnny Dyani, in 1971, the trio started giving courses at New Hemsher College, one of the leading popular music schools in the U.S.A. That same year, they gave a concert in Ankara whose live recording was made by Sonet Records.

While in Denmark and Sweden, he collaborated with some of the highly esteemed names of the jazz scene, such as Dexter Gordon, George Russell and Clark Teery. For Temiz, this was a period full of rich musical experiences. 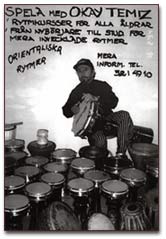 A year later, Temiz, together with the skilled bassist Dyani and the South African trumpeter Mongezi Feza, formed the group Xaba, which makes up a crucial part of his musical career. This very special group shortly gained an immense public attention with the three albums released in Scandinavia, U.S.A and Britain by Sonet Records and secured their position in the history of jazz. Xaba’s music could be described as an entirely different version of the Avantgarde Jazz style.

xophone, flute, clarinet, bass and piano with Turkish instruments such as zurna, ney, kaval, ud, saz, gayda and sipsi. For a short while, his mother Naciye also joined the group and accompanied in some of the performances they gave in Sweden. Oriental Wind was originally made up of renown musicians like pianist Bobo Stensson, bassist Palle Danielson, saxophonist Lennart Aberg, and the master of ney and gayda, Hacı Tekbilek.

Temiz continued his cultural activities in Sweden until 1990. During his efforts of applying the classical Turkish “makam” music to jazz, he discovered a number of Turkish musicians and helped them gain a universal standard in the music scene. Tours to Europe, India and U.S.A were followed by numerous concerts, recordings and seminars.

His album “Fis Fis Tziganes”, among 3000 albums, reached Number 3 on the

“Green Wave”, recorded in Turkey, for years remained to be among the top 10 of World Music DJs’ annual lists (1992).

After 1993, Temiz continued his career in Finland where he met Anna, who later became his wife. His marriage and the birth of their son Tomi brought a new perspective both to his personal life and his musical career. He then recorded his album  “Magnetic Band”, in which Temiz embraced the improvisational spirit of Jazz with Afr

ican and South American rhythms, and amalgamated this sound with traditional Turkish melodies. The work which was released in Greece as a CD was shortly chosen the album of the month and was also rated as a five-star album by the Down Beat jazz magazine.

With the great support of  Sweden’s Ministry of Culture, Okay Temiz was able to spread his thirty year long activities in Scandinavia to a worldwide platform and extended his corporate works with world musicians to wider audiences. Their music which excitingly blended the unexplored Turkish motifs with the sound of jazz was quickly recognized in

Scandinavia, seeing its audience expand apace through festivals, recordings and concerts. To continue his struggles for spreading Turkish music all over the world and be able to cooperate with more Turkish musicians, Temiz decided to return to his homeland, in 1998.

His insatiable energy and endless passion for exploring the unknown, added to his long time musical experience led him to engage in numerous projects. Among these, an album sponsored by the Turkish Ministry of Culture and Banvit, called “Kuzeyden Güneye Yansımalar=Reflections from North to South” that included his compositions and was recorded together with Izmir State Symphonic Orchestra; a CD called “Kutlama=Celebration” which was made for the 7

A compilation of Okay Temiz’s compositions were gathered in five CDs as part of Başarı Eletronik company’s 2000 cultural activities.5th. Anniversary of the Turkish Republic; and another CD, entitled “Yaşamın Ritmi=The Rhythm of Life” produced for the 30th. anniversary of the company Banvit can be stated.

Temiz and his group organized seminars for the promotion of both Turkish and world music in European cities like Athens, Thessaloniki, Barcelona, Budapest, Zurich, Ljubliana, Amsterdam, Rotterdam, The Hague and Lisbon. He also gave concerts in Istanbul, Ankara and Izmir as a member of the Ministry of Culture Turkish Music Ensemble.

Okay Temiz is an accomplished musician who plays all sorts of percussion instruments that he has either collected or crafted over the years in a style of his own and can skillfully transform even the simplest ryhthms into a whole new set of sounds.

Okay Temiz appeared in more than 350 festivals and took stage at about 3000 concerts in Europe, America and India. He came to know, listened to and worked together with top musicians who have mastered the rhythms of Africa, South America and India, in the meanwhile learning how to make and play their instruments like the quicca, berimbau, finger piano and talking drum. He has a wide collection of self-made ethnic and electronic instruments including the hand-made copper drums, “Magic Pyramid” and “Artemiz”, which he has made of camel and sheep bells.

Okay Temiz still continues his mission of spreading multi-cultural music to wider audiences through the myriad of experiences he has gained over the years.

His recent recording in the contemporary style, made together with the brilliant Greek guitarist Nicky Skopelitis, jazz saxophonist and clarinetist Floros Florides will be released this winter as a Cd by the American “Be Last World Action” record company.